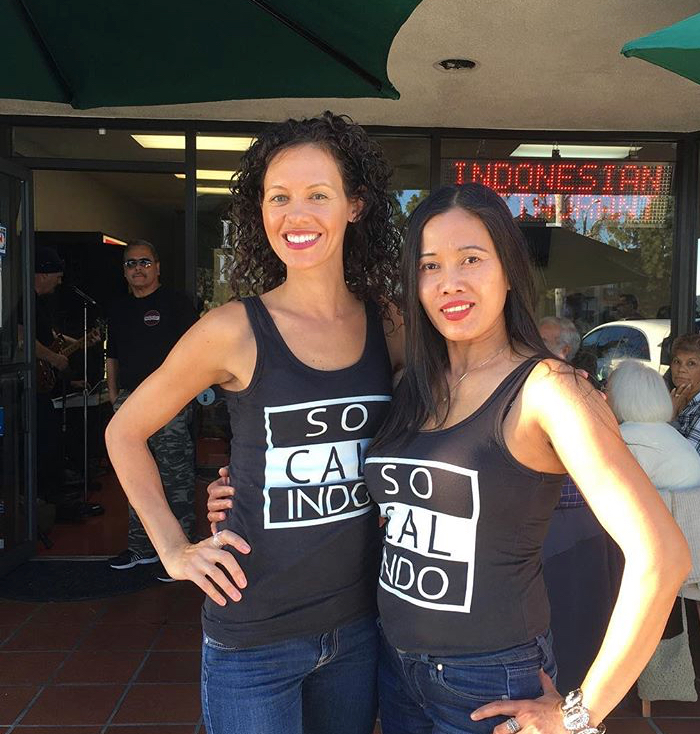 My Indo Story Hi! I’m Sara and I live in beautiful Orange County, California, where I was born and raised. I graduated from UC Santa Barbara with a dream of traveling the world. This dream became a reality when I became a flight attendant. Throughout my career, I lived and worked in multiple places including New York, New Jersey, Maui, Seattle and Southern California. I always said that I never wanted to move back to “The O.C.”. Well, after over 12 years, I finally did. In case you are wondering, what brought me back other than the sunshine? It was my kids (everything is about the kids, right?!) … for them to be close to family as well as being able to take advantage of help from my parents while my husband and I focused on our careers. As most of you know, for Dutch-Indonesians, family is everything. I’m married to a native East Coast man and we have 2 beautiful children – a daughter and a son. Luckily, my husband loves traveling as much as I do and there is no doubt that we passed that on to our kids. My husband is not Dutch-Indo but he is of European decent. He often tries to see if he can get tanner than me in the summertime but he has yet to win. My olive skin gives me the advantage. Being a mother and wife are my first and most important roles. On top of being a stay at home mom, I am an active volunteer in the community. I chair two committees with the Daughters of the American Revolution, one focusing on active duty military and the other on veterans. I am also the Parent Association President at my children’s school. And in between all of that, I am privileged to help others focus on whole body health through my Arbonne business. Now, on to my family history … I am a first-generation Dutch-Indo born in The United States. My mother was born on the small island of Belitung, Indonesia. My dad is an American with German and Irish decent. I have always loved learning about my relatives and ancestors and researching to see how far back I can go. On my father’s side, I can trace back to just before the American Revolution. On my mom’s side, I can only trace back to my great great Opa. I have quite a bit more work there and am eager to learn more. If you have ever worked on family history, you will understand the further back you go in time, the more difficult it is to find proof of lineage. I am proud of my Dutch-Indo heritage. My Oma and Opa were as well. Opa served in the Royal Netherlands Navy during World War II. He was on Hr. Ms. Kruiser de Ruyter and was a survivor of the Battle of the Java Sea. On February 27, 1942 from the top of the ship mast, Opa saw the torpedo launched from a Japanese submarine. That torpedo hit his ship and sunk it. Opa spent 3 days in the water before being “rescued” by the Japanese and then spent 3 ½ years as a POW. As many other Dutch-Indo POWs, he was eventually placed in Thailand to work on the Burma Railroad. Opa never talked about his time as a POW. However, while working on a history project for high school, I managed to record an interview with Opa on cassette tape. This was the first time he talked about his time in the Dutch Navy, what happened at the Battle of the Java Sea, and his time as a POW. Over the past couple years, my family and I would talk to Opa about his life. It was becoming more and more important to document what we could as he was in his late 90’s and our time with him was becoming limited. He passed on March 3, 2017 at the ripe age of 98. He was the last living survivor of Hr. Ms. Kruiser de Ruyter. Oma was an amazing woman and the best cook. There was always food and she never let anyone leave hungry. Oh, how I miss going to their home, walking inside and smelling all the delicious homemade meals (ok … my mouth is totally watering right now!). Nasi Goreng, Bami, Lumpia, Rosestroop, Sate, Lumpia, Lempur, Agar Agar, Chicken Semur, Opor Ayam, Pisang Goreng. You name it- she made it! And of course, let’s not forget the coffee or Muisjes! Both were staples in their home, my parents’ home, and now my home. Oma was not only an exceptional cook, but she was also a strong woman. She was raised in Yogyakarta and endured 2 years of labor in a women’s camp during World War II on the island of Java under Japanese occupation. She was a devout Catholic who raised 5 children, all born in Indonesia. Opa worked mostly away from home. Because of this and, much like many mothers, her focus was on her children. One of the things I love most about being Dutch-Indo is that people often have a difficult time guessing my heritage. I often get Hawaiian, Brazilian, Mexican, Italian, Spanish, mulatto …. But never Indo. I frequently remind my children of the importance of learning about our family. It’s not just about the four of us but it’s about their grandparents, aunts, and uncles that go back generations before us. Oma & Opa worked hard to provide a good life for their children whether it was in Indonesia, Holland or The United States, where they all became American Citizens. Oma & Opa welcomed everyone into their home and were the most giving and loving couple. They loved their children, grandchildren, and greatgrandchildren. They set an example of how we should live through generosity and love. My hope is to pass that on to future generations.